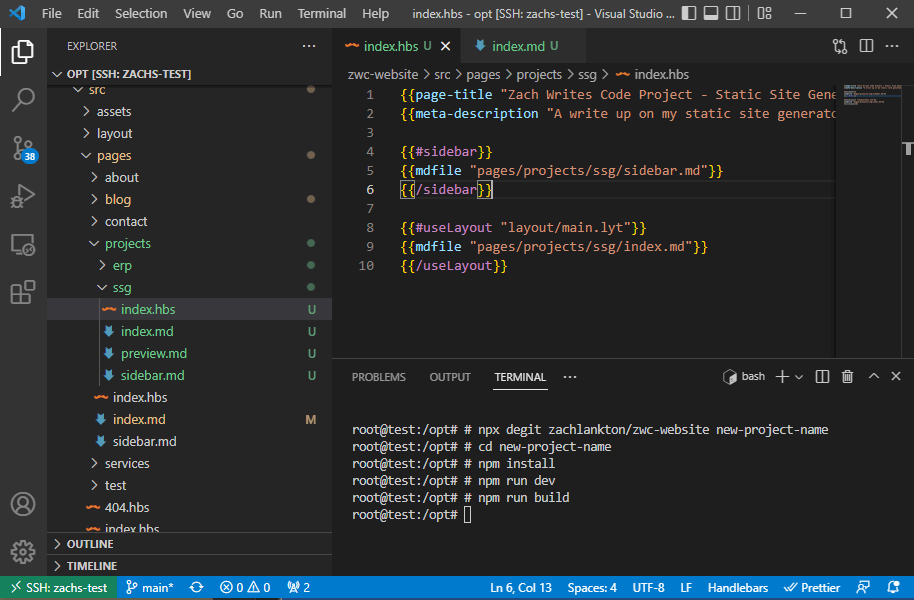 This project is a static site builder that I created to generate this portfolio site you are reading right now! Why in the Sam Hill would someone do such a thing?! For fun and learning, of course! I know that I could have easily used one of the many choices out there for generating static sites, but I had this idea that I wanted to try out, and this is the result.

Only tested in Linux! Specifically Ubuntu.
Windows is not supported at this time.

The best way to try out my site generator is to degit my website repo. This repo contains both the source code that generates the site and the source code for this site itself. This is intentional as I wanted the ability to make changes on the fly to the generator if I needed to. The generator code is relatively small and pretty easy to grok.

Run the following commands to get up and running quickly.

A static build can be generated by running:

This will, by default, create a dist folder in the root of the project and output all build files into it.

This SSG is a Multi-Page Site Generator. The output is based on the files in the src/pages folder. If you are familiar with file-based routing used in frameworks like next.js you will be at home.

In a nutshell, everything you create under the pages folder is replicated practically identically in the output folder. There are a few exceptions to this rule:

Files that end in *.hbs will not be included directly in the output. *.hbs files are handlebars templates that will be rendered during build time. The resulting output will be an *.html file.

Markdown (files that end in *.md) are ignored by the builder and not copied to the output. They lie dormant until a handlebars helper mdfile is called inside a handlebars template. This will be explained in more detail below.

This project depends on the Markdown-it library to render markdown files, which uses the Commonmark Spec. Highlight.js has been integrated to include pre-rendered static code highlighting. The only thing that needs to be shipped to the browser is the CSS style of your choice. assets/styles/a11y-dark.css is included by default. Additional styles can be found at https://github.com/highlightjs/highlight.js/tree/main/src/styles

The builder will automatically pre-render markdown fenced code blocks that include a code label with the correct highlighting structure. No client javascript is needed.

The code for these built-in helpers is found in

and is very hackable. It is encouraged to look at this source code to see how these are made to get inspiration on building your own custom helpers.

These helpers are mainly self-explanatory and are better explained by example. Let’s start with a simple Layout, which shows examples of the following placeholders:

and the following helpers:

Now let’s take a look at index.hbs to see how to use the following helpers:

The example above shows that the first couple of lines set the page title and meta description. That is followed by a sidebar block helper with a nested mdfile helper.

The mdfile helper will render a markdown file at the path specified.

Note: paths used in mdfile and include are absolute paths relative to the src folder. This holds true for all files and folders, no matter how deeply nested.

Finally, we see the useLayout block helper with a nested markdown file.

It is crucial that the useLayout helper be the last block in the template as it depends on the data that gets set by
page-title, meta-description, and sidebar helpers

If you refer back to the layout example, you will see the sidebar section like this:

and in the template, you see this:

What’s happening is the layout file includes the layout/main-sidebar.md, which will be included on every single page that uses this layout. Then we see the {{SIDEBAR}} placeholder, which gets set in the template itself. This allows you to have “per page sidebar items” using the sidebar block helper as shown above.

Suppose we have the following sidebar markdown files:

When the builder runs, the final output will be:

Note: Technically, the output will be all HTML, but it’s easier to illustrate with markdown, as shown above.

The src/assets/ folder is unnecessary as any static assets you have in your src/pages/ will be copied into the output folder. However, sometimes it is nice to keep your fixed assets separate from your pages and templates. This allows you to do that.

The assets folder included in this project has the following structure and is self-explanatory:

Custom Helpers can be defined in 1 of 2 places. Either in the config/custom.helpers.mjs which will be run before any rendering takes place. Or each folder in the pages directory can have One helpers.mjs file.

The helpers registered in the config/custom.helpers.mjs can be considered global helpers accessible to all the templates.

The helpers.mjs file in a folder can only be considered a local helper for templates in that directory.

Note: Handlebars helpers only have one scope: global. It is possible to overwrite the global built-in helpers. So don’t create helpers named things like mdfile, sidebar, etc., unless you know what you are doing.

Another Note: the “local” helper is a leaky abstraction. The helpers registered in one directory do not get unregistered before moving to a new directory. This implies that these helpers might be available in subfolders or even parent folders that get rendered after those helpers are registered. But the only guarantee that gets made for sure is that the templates in the same folder as the “local helper” will have access to those helpers. In other words, do not rely on helpers being available outside their local folder, even though they might be.

How to create custom helpers.

All helper files need to export a loadCustomHelpers function that accepts one argument named regHelper.

Inside the loadCustomHelpers function, you can register your custom helpers. The regHelper function is the same as Handlebars.registerHelper function. Here are some examples using our built-in helpers!

You can customize the build process by making changes to the config/build.config.mjs file. Here the sky is the limit; you can do anything you can imagine. Here is the default config in the project:

src is an absolute path relative to the src directory.

dest is an absolute path relative to the output directory, which is dist by default.

data is any javascript object. This data will be passed into your template for you to use however you would like.

This is where you could perform things like fetching data from a CMS or API and then include that data in a manually built template as explained in the comments of the config/build.config.mjs file.

This, combined with custom helpers, would allow you to do creative things like generating many pages from a single template with different data! For example:

Notice we are storing the list_template.hbs in a different folder than pages… this is because the buildPages() function will build anything inside the src/pages folder. But we can make any folder structure we desire inside the src folder. In this case, we make a folder called templates for storing templates for use in our custom builds like this one!

If you enjoy this content, consider buying me a coffee to keep me fueled to make more!